A new crop yield model developed by NASA Harvest and partners at the University of Valencia, University of Maryland, and NASA Goddard Space Flight Center is helping to fill gaps in the current agricultural monitoring systems. The developed model, called ARYA for the Agriculture Remotely-sensed Yield Algorithm, uses Earth Observation (EO) data to build quantitative, global yield estimates at a sub-national and national level. Recent testing of ARYA found that the model was able to predict wheat harvests within less than 0.7 tons/hectare 2 months ahead of harvest at the subnational level.

Wheat is a major crop that is vital to many countries' economies and food security. In 2019, the FAO reported that just under 180 million tons of wheat were harvested in 2019, while more than $39 billion USD of wheat was exported. Most of this production is focused within 7 countries (U.S., Ukraine, Russia, Germany, France, Australia, Argentina) who together account for 70% of global wheat exports. This makes the ability to monitor crops and predict yields within these countries vital to ensuring the global wheat market and many nations’ food security both remain stable. 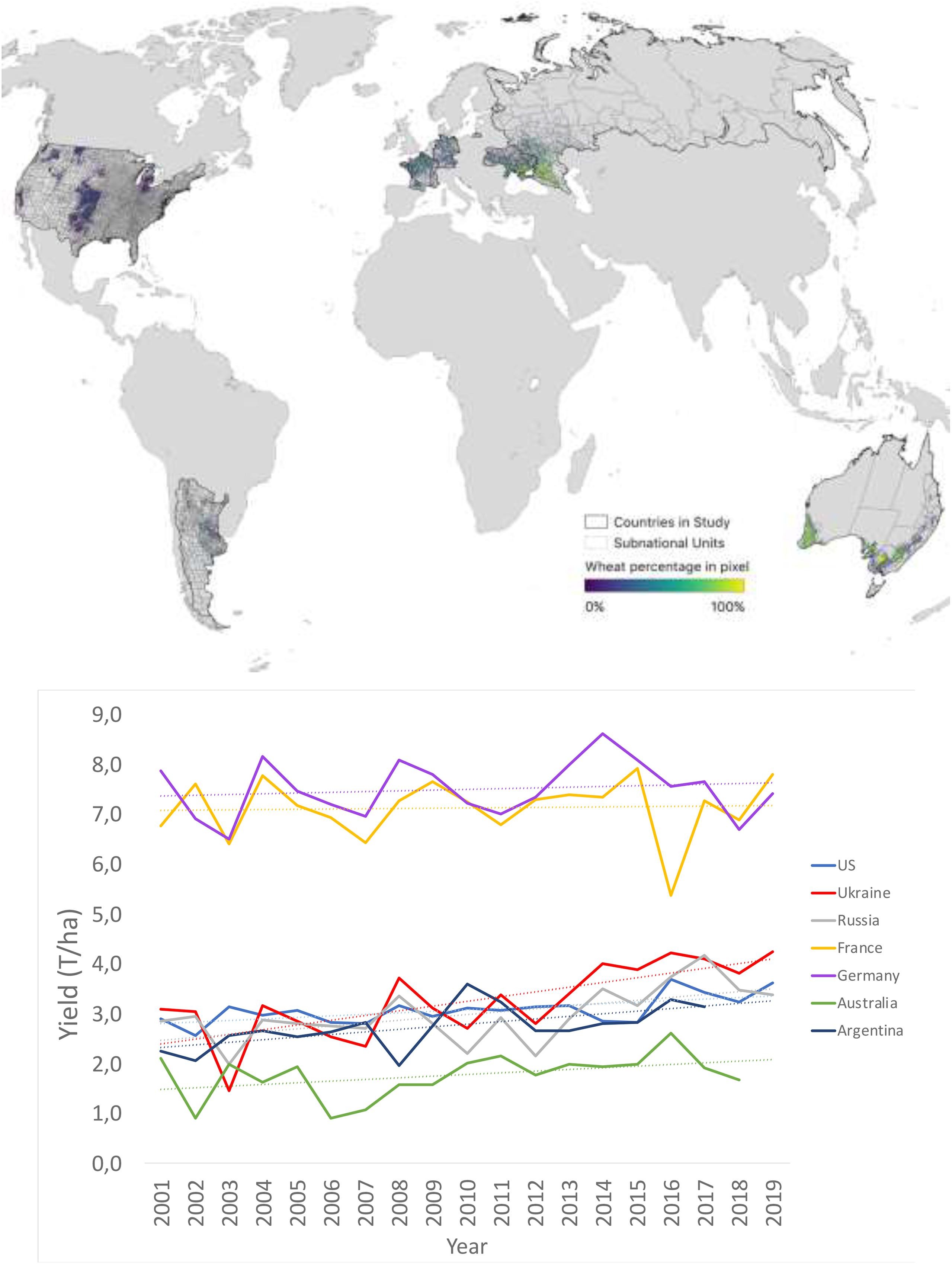 This map shows the percentage of each pixel containing wheat in the 7 top wheat-producing countries. The graph shows annual trends in wheat exports for each country.

In a recently published journal article, the team describes current monitoring efforts and the gaps that exist. While many studies on agriculture monitoring have been conducted and many countries have created their own national efforts, there are only 3 freely available global monitoring systems in place. The systems, run by the U.S.’s USDA, the United Nations’ FAO, and the Chinese Academy of Sciences, use EO data as part of their efforts, but primarily as a tool to assist their qualitative assessments. ARYA was designed to push the boundaries of remote sensing and determine the effectiveness of a more quantitative crop monitoring effort.

Additionally, most crop monitoring systems lack both global and timely forecasts. Current global systems have a temporal scale of 1 month and this gap between reports can often lead to surprises that significantly affect market prices. A model capable of more frequent reporting could cut down on these potential surprises, particularly during extreme weather events. Given the high temporal availability of EO data, ARYA increases the number of observations that can be generated, allowing for more frequent crop reporting.

Finally, there is little information on the forecast uncertainty of current forecasting systems. Report consumers are unable to ascertain the certainty to which the model is making its predictions. ARYA is able to provide the statistical certainty of its estimates which allows for more confident action upon its predictions.

ARYA is the latest iteration of a crop yield model that various members of the team have been developing for more than a decade. In 2010, NASA Harvest Program Director Dr. Inbal Becker-Reshef calculated NDVI from moderate resolution MODIS imagery and successfully predicted crop yields in Kansas and Ukraine (Becker et al., 2010). Dr. Belen Franch, NASA Harvest’s Crop Yield Co-Lead, expanded on this work in 2015, adding data to the model on the local air temperature during the growing season (Franch et al., 2015). This addition was tested in the U.S., Ukraine, and China at a national level and was able to estimate yields with less than 10% error at 2 months in advance of harvest.

Given MODIS’ coarser spatial resolution, pixels in the satellite’s imagery often contain both cropland and non-cropland land cover. This mixing can lower a model’s accuracy and so in 2019, Belen led a team to develop a method to “un-mix" the different land covers contained in the pixel and exclude non-cropland data (Franch et al., 2019). Deployed in the U.S. and Ukraine at both national and subnational levels, the improved model was able to estimate yields with greatly improved accuracy.

The latest development in this modeling framework is the addition of land surface temperature (LST), an EO variable that measures the temperature of the surface of the earth. LST has often been used to explore water deficits and wildfire risks due to the effect temperature has on the wetness of soil. This relationship between temperature and soil moisture also makes LST a good potential indicator of crop success. Including LST in ARYA allows the model to better account for stress conditions that could be caused by a shortage of water or extreme variations in temperature.

In its latest test, ARYA was used to predict wheat yields in the 7 highest wheat-exporting countries. They gathered yield data at a subnational level for each country for the previous 19 years. They then modeled each year using coincident EO data and compared the forecasted results with the observed yields. The team found that including LST in the model lowered yield estimate errors for every country at the national level. All countries also had lower estimate errors at the subnational level using LST, with the exception of Russia which had slightly higher errors at this administrative unit. These errors ranged from 0.2-0.4 tons/hectare at the national level and 0.5-0.7 tons/hectare at the subnational level, indicating very accurate estimates, particularly given the 2 month lead time of each country’s respective harvest.

This graph shows the national and sub-national estimation errors in terms of tons/hectare at the end of each country’s growing season.

Despite improved accuracy, the team is already exploring ways to improve ARYA. One avenue mentioned is the inclusion of meteorological data. The team points out that some severe weather events, like abnormally wet conditions, go undetected in the current iteration of ARYA and that parameters like accumulated precipitation could be incorporated into the model.

With this successful test, ARYA has been shown to be a good forecast model of crop yields in a variety of major wheat-exporting countries. Its high accuracy, along with its ability to inform the user of its forecast uncertainty, makes it an excellent tool for those interested in market transparency and food security. You can read more about the model here.